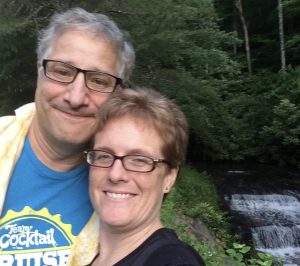 The Knife Butler was invented by Allan “The Magnet Man” Hoffman, along with his partner Richard Scholten, in 2011. For years, Allan made every Knife Butler by hand at his home in North Carolina. His wife, Jessalynn (“JR”), has taken over the business since Allan’s death from cancer in May 2020. She makes the Knife Butler according to Allan’s original formulation in order to continue the legacy of the Knife Butler.

Over the years, Allan worked tirelessly to make the Knife Butler a beautiful and useful product for every kitchen. He loved to see customers’ photos of their Knife Butlers in action and to hear how much they enjoyed the product he had created.

You can read more about Allan and his life here.

ABOUT THE KNIFE BUTLER

There are so many choices and options in any kitchen. For decades, people have put their knives in a drawer, which often damages the knives with scratches and dents. Others use wood blocks, which take up counter space and often leave hard-to-clean contaminants inside the slots

More recently, manufacturers have begun to produce magnetic knife racks that attach to the wall – a knife-storage tactic recommended by Julia Child in her 1975 “Joy of Cooking.” But these knife racks have had problems, too: they use steel to obtain their holding power, and that hard steel then comes in contact with the knives every time the blade touches the rack.

The KNIFE BUTLER solves all of these problems: Our magnets are made entirely out of rubber. Other knife racks use ceramic or rare earth magnets, which cause an overly-powerful pull and “clunk” when the rack grabs the knife from your hand. This causes scratching and chips on the knife, marring and therefore dulling the blade.

By nature, rubber magnetic material normally has less holding force than ceramic or rare earth magnets. But our breakthrough in engineering has allowed us to come up with the most efficient magnets ever designed by using rubber magnets similar to those used everywhere on refrigerators.

The KNIFE BUTLER uses the most modern technology available to add a soft outer layer to alleviate that clunk and clatter that occurs when the knife touches it. That layer keeps the edges sharp and scratchless while adding friction to further the holding power to an all new level.

Your KNIFE BUTLER comes covered in one of two products: A black food-grade silicone, or egrips®, which is a soft clear elastomeric rubber material used to keep all types of products from sliding. The clear egrips® enables us to customize your knife racks with art such as woodgrain, faux stainless steel, different colors or even custom designs. You can read more about egrips® on the company’s website.

Don’t feel like hassling with mounting screws and a power drill! KNIFE BUTLER saves you the time and hassle with easy installation. A peel-and-stick option features powerful VHB tape that will allow you to install your knife rack at your convenience in a matter of minutes. You can also choose the double-sided option for installation on the side of your refrigerator or other steel surface.

Our magnet engineer, Richard Scholten, has been tinkering with magnets ever since he was a kid. Like most boys, he was perplexed by the way something could have a force that couldn’t be seen and only sometimes felt.

It stuck in his head as he grew up, and after getting his engineering degree from Purdue University in 1951, he went to work for Indiana Steel, which was the world’s largest producer of permanent magnets. It was then that Mr. Scholten wrote the book on permanent magnets. Before his time, all magnets had just one positive side and one negative. He became the first to discover that greater force could be achieved by creating multiple poles.

Mr. Scholten started his own company, Magnets Inc., which then made the most powerful rubberized strip magnets to be used in refrigerators, copying machines, and many other products. But his magnets were always hidden inside the products. Now the Knife Butler stands proud and ready to serve and looks great on your wall or refrigerator.

Through the use of soft-touch rubber covers, our magnets have developed a holding power which is as perplexing as magnets themselves.  They hold better the heavier the object is. They have no weak spots and allow your knives to rest without a sound, quietly. They need no complicated directions or tools to install. And one thing that our magnet guru engineer demands – they are made here in America – and his hands still touch every single one that is made!

Due to supply issues, KnifeButler.com is closed for the rest of 2020. We hope to reopen in 2021! Existing orders will be filled. Dismiss

We use cookies to ensure that we give you the best experience on our website. If you continue to use this site we will assume that you are happy with it.OkPrivacy policy